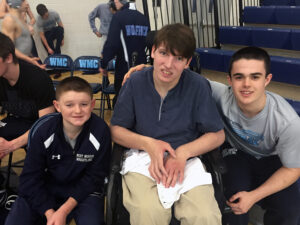 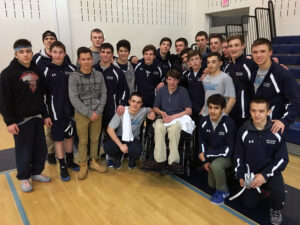 On February 5, the West Morris Central High School wrestling team had a special captain to cheer them on in their match against Randolph High School. Matheny School student Shane Szott was captain for the night, and, according to wrestler Justin LeMay, “We couldn’t have asked for a better wrestling captain. Shane was cheering us on throughout the match; he was awesome.” Teammate Ricky DeFrance, who met Shane a few years ago at a Long Valley Middle School match, said, “He always makes me smile.”

Many of the wrestling team members began volunteering at Matheny in the summer of 2014 when a group of Long Valley Middle School students visited as part of a group  from St. Luke’s Parish in Long Valley. DeFrance and teammate Matt Blount were part of that original group. “When I visit Matheny,” Blount said, “not only am I helping the kids out and seeing them enjoy themselves, but it’s a learning experience for my peers and me as well. The relationships I have developed with the students there will last a lifetime.”