When Shane Szott was born on February 6, 1995, in Independence, MO, he was particularly fussy and initially diagnosed with severe colic and reflux. By the time he was four or five months old, the doctors continued to say he was just developmentally delayed, but, when he reached 10 months of age, the diagnosis had changed to cerebral palsy.

Shane’s parents, Dave and Andrea Szott, first heard about Matheny from Dave’s cousin, Adam Kuehn, MD, an anatomical pathologist. The Szotts were still living in Missouri while Dave was playing football for the Kansas City Chiefs, “but when we came to visit our family in New Jersey,” Andrea Szott recalled, “we stopped by to see Matheny. I thought it was a nice school, but I also felt that maybe it wasn’t right for Shane at that time. I also believed that I would never consider a residential facility for my son.”

The Szotts moved back to New Jersey when Shane was turning five. Within a few months of the move, his diagnosis was changed to,“CP with epilepsy and autistic tendencies. He became very frustrated and non-cooperative. The stress was intense, and we started researching respite care at Matheny. We did a second night of respite within that same year, and it became clear that Matheny and its staff were well qualified and equipped to care for Shane. We then put Shane on the wait list, and, shortly afterwards, received the call that a bed had opened.” 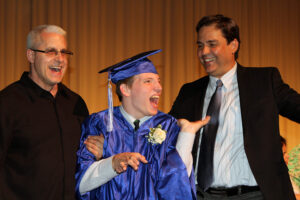 After Shane was admitted to Matheny on December 30, 2005, the Szotts continued to have him come home to Morristown, NJ, on weekends. One Sunday evening when they were bringing him back to Matheny, “He cheered and hollered and pointed to school. I looked at him and asked in disbelief if he was happy to be back at school, and he shouted, ‘Yeah!’ and had a big smile on his face. At that point, I realized that Shane was enjoying his new environment, and that he was truly happy. The team effort at Matheny is what truly propels these children forward beyond anyone’s imagination. The therapists work with the teachers, and the teachers work with the paraprofessionals, and the paras work with the personal care assistants. And, the parents’ input is accepted and taken into consideration.  Shane still loves to come home and visit,” Szott said, “but at the end of the day, he signs, ‘All done’, and that means he’s ready to go back to his other home. He is cared for with love and patience, and his life is full and very blessed.”

We can't wait to show you our full Miles for Mathe