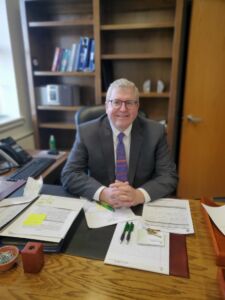 Please join us in welcoming William M. (Bill) Kent, Matheny’s new President & CEO! We are so excited to have him join us!

Mr. Kent graduated from Wittenberg University with a biology major and earned a master’s degree in health administration from the Washington University School of Medicine. Upon earning his master’s degree, Mr. Kent completed a two-year administrative fellowship at Massachusetts General Hospital in Boston.

Mr. Kent has served on numerous community boards including Big Brothers Big Sisters of Lehigh Valley, the Greater Cincinnati Health Council, the Life Center Organ Donation Network and the March of Dimes. Mr. Kent is an Eagle Scout and served as district chairman for the Boy Scouts in Baltimore. While at Cincinnati Children’s, he developed a health careers exploring program for high school students. Additionally, he participated on the Cincinnati Mayor’s task force (including the United Way) to develop a plan for increasing economic inclusion and supplier diversity in the greater Cincinnati region. Mr. Kent is married and has two children.