The building of the Matheny Center of Medicine and Dentistry was a top priority for Steve Proctor when he joined Matheny as president in 1998. The Center was completed in 2003 and continues to serve both Matheny’s inpatients and people with disabilities in the community who need medical and dental care by doctors and dentists who understand how to treat and care for them. 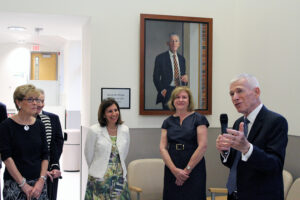 So, it was fitting that the building should be renamed The Steven M. Proctor Medical Building after Proctor, who retired in December 2014. On June 9, 2015, the Friends of Matheny held a dessert reception there to unveil a portrait of Proctor, created by artist Joseph Sundwall.  Proctor, clearly moved by the event, thanked all the people he had worked with through the years, whose top priority, he emphasized, has  always been the care and well-being of Matheny’s students and patients. He added that the opportunity to be at Matheny was “a gift from God.”  He also expressed appreciation for all the contributions made to Matheny by the Friends of Matheny and paid a special tribute to former chair of the Board of Trustees, Daniel McLaughlin.