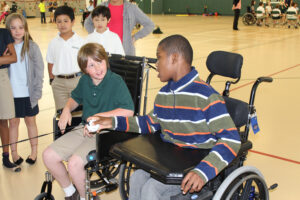 Jackson Ketterson gets some pointers from Matheny student, Jameir Warren-Treadwell.

“It’s really fun! It’s a new style of playing.” That’s how Jackson Ketterson, a fourth grader at the Far Hills Country Day School (FHCDS) described the adapted versions of traditional sports demonstrated during a recent visit by students and staff at Matheny. The FHCDS students tried their skills in such activities as adapted basketball, wheelchair obstacle courses, and a special ball toss. “It’s really cool how they do things,” said Marissa Mikosh, and another student simply described the experience as “awesome.”

The visit had several objectives: to show the FHCDS students how their peers with disabilities can enjoy many of the same activities they do; to lessen unease about how to interact with people with disabilities; and to replace that unease with a sense of camaraderie as the two groups competed on a somewhat level playing field. 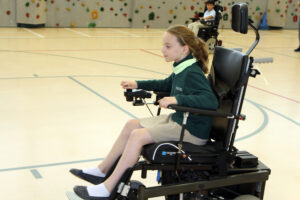