Introducing The Faces of Matheny

Matheny is dedicating 2022 to celebrating an important milestone – our 75th anniversary! 75 years of enriching lives 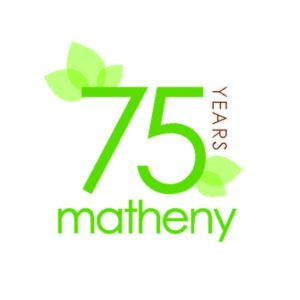 and growing abilities for children and adults with developmental disabilities. This institution has an incredibly inspiring story that began with one family’s vision and devotion. We are proud to continue the work each and every day to help ensure that our students, patients, and residents have the medical care, education, and other services that allow them to live the active and fulfilling lives they deserve.

As part of our celebrations throughout the year, we want to highlight Matheny community members – the people who have made Matheny the place we all know and love over the last 75 years. What initially drew them to Matheny? What makes them stick around, through both the joyful and the challenging periods? What are their favorite memories and stories? What’s the first thing that comes to mind when they think of Matheny?

We hope you enjoy this new series – The Faces of Matheny!

And who better to start this story sharing than a community member who found his way back to Matheny after a period away? Meet Matheny’s new chaplain, Fr. Paul!

Fr. Paul Varchola West, more commonly known around the halls of Matheny as Paul, received a B.M. in Music Theory and completed an MFA in Music Composition in 2010. After completing his degree, he began working at Matheny as a Recreation Therapy Assistant. Paul later worked in the Education Department as a 1:1 Aide, and then as the school’s Music Teacher until 2016 when he began his seminary studies. Fr. Paul completed his M.Div. in May of 2020 and was ordained a Byzantine Catholic Priest on July 18th of that year, at which point he was assigned as the pastor of Our Lady of Perpetual Help Byzantine Catholic Church in Levittown, PA. During seminary formation, Fr. Paul completed his Chaplaincy Internship (CPE) at UPMC Shadyside Hospital in Pittsburgh, PA. Recently, Fr. Paul caught wind of an open Chaplaincy position at Matheny and jumped at the opportunity to return to the “Matheny Family” as he always found great joy within those halls. And it’s not just him – Paul’s wife Alissa was a Music Therapist at Matheny from 2005-2009, and again from 2010-2016. Their two children have many fond memories of Matheny and are looking forward to making many more. Truly a family affair!

When asked about his favorite Matheny memory, Fr. Paul had this to say: 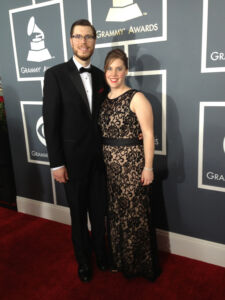 “Back in 2013 when I was working as the school’s music teacher, an album I had performed on years prior while living in Los Angeles was picked 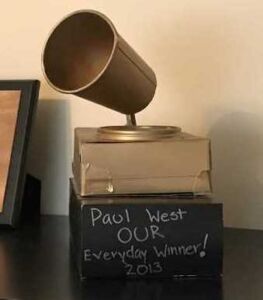 up for a Grammy Nomination. To my surprise, there was a rather large uproar at Matheny, which honestly rivaled the Red Carpet! Anyway, there was so much excitement that, in all honesty, I wanted to “bring home the Grammy” more for the folks at Matheny than for myself. So, my wife and I got to travel back to LA, go to several fancy parties, walk the Red Carpet, and even watch the Grammys performances from AMAZING seats! After all that…we didn’t win the Grammy. When I returned to Matheny, a whole group of students presented me with a Grammy Award they made with their art teacher, Felicia. It said “Paul West – Our Every Day Grammy Winner” on it. It was made out of a tissue box, a Styrofoam coffee cup, and some gold paint. That award still sits on a shelf in my office. My Grammy Nominee medal from the Recording Academy is in a box somewhere…I have no idea where. What Matheny (the staff and students/residents) did was demonstrate how true the phrase “the Matheny Family” really is. The unity, the love, the care, the devotion, dedication, support, pride in one another’s achievements – that’s what I will remember, always.

We’re so grateful to have Fr. Paul back at Matheny! Thanks for the wonderful story. Here’s to the many more stories we’ll create here – over the next 75 years and beyond!

Do you have any favorite Matheny stories that you would like to share? Would you like to be featured in this series (or know someone you’d like to see featured)? Get in touch at marketing@matheny.org or on social media @mathenymedical.

One response to “Introducing The Faces of Matheny”