The New Jersey chapter of The American Academy of Pediatrics is dedicated to improving the health and well-being of children in the state. At its annual New Jersey Children’s Ball, held April 20 at The Palace at Somerset Park in Somerset, NJ, the organization honored its Pediatrician of the Year, Margaret ‘Meg’ Fisher, MD; Champions for Children, State Senator Robert Gordon and Gary Rosenberg, MD;  and presented a Youth Achievement Award to brain injury survivor Amara Riccio.

As part of the evening’s festivities, the Matheny Microtones, a choir of Matheny School students, entertained the dinner guests with four songs: the Beatles’ “Yellow Submarine”, the Jackson Five’s “ABC”, Todd Rundgren’s “Bang on the Drum”, and Randy Newman’s “You’ve Got a Friend in Me”. 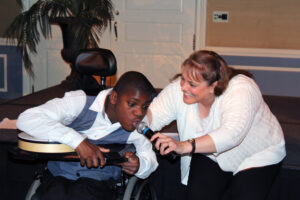 As part of Matheny’s Music Therapy program, choirs such as the Matheny Microphones perform at venues throughout the community and the state. Music therapy positively impacts Matheny students’ and patients’ cognitive, physical, emotional and social skills. In addition to singing, activities include songwriting, lyric discussion, and music listening.