How Sweet It Is!

After a 23-year run, John Tompkins of Basking Ridge, NJ, retired from his career on Wall Street. In April 2011, he started a new career inspired by his love for the caramels a childhood friend’s mother had made. His company, based in Randolph, NJ, is called JT’s Confections, and he modestly claims that, “My caramels are the best caramels you will ever eat.” He expanded from caramels into pecan clusters consisting of caramel poured over roasted pecans and hand dipped in rich chocolate.

The confections business, he says, “is so very different from Wall Street. Your competitors want to see you succeed!” Tompkins has succeeded, and he has also used his new vocation as a way of giving back to the community, providing candy to help nonprofits raise funds. Tompkins’s daughter, Georgia, a student at Ridge High School in Basking Ridge, is an active member of the Junior Friends of Matheny, a group consisting mainly of Ridge and Bernards High School students who volunteer and raise money for Matheny. 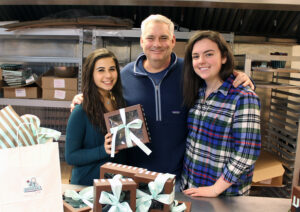 For Valentine’s Day, Tompkins is donating 100 boxes of clusters to the Junior Friends, who will sell them at $33 a box. “And if they sell more,” he says, “I’ll try to fill the order.” The Junior Friends of Matheny is open to all high school age volunteers. Its mission is to support Matheny through both fundraisers and volunteering and to bring awareness and acceptance of children and adults with disabilities.