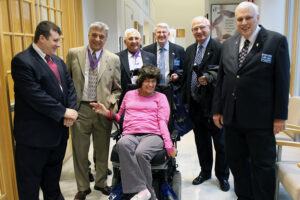 The Knights of Columbus Council #5959 in Martinsville, NJ, donated a large amount of knit sportswear to Matheny that was then offered for sale to Matheny employees. Proceeds from the sale will then be donated to The Matheny School.

Several members of the Knights visited Matheny on December 2, touring the facility, learning about the many programs and services and visiting with some of the students and patients.

The Knights of Columbus Council 12700 from Our Lady of Mt. Virgin Church in Middlesex has been a long-time supporter of Matheny.

During the holiday season, one of the Council’s members, Kevin Mazza, left, visited Matheny to present Steve Proctor, president, with a check for $1,537.

Reminder that tomorrow is #GivingTuesday. In this

Next week is #GivingTuesday. But you don’t have

Happy Thanksgiving from all of us at Matheny! We'r

The holidays will be here before you know it! @sec