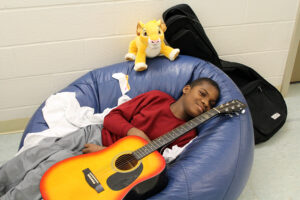 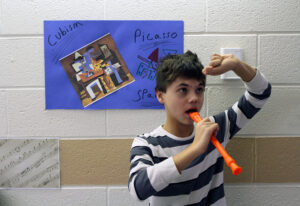 Ryan O’Connor is one of Pablo Picasso’s “Three Musicians”.

Students in three Matheny School classes researched famous artists and created displays to bring the artists’ work to life. The ‘Festival of Living Art’ took place in the morning and early afternoon on January 11 in the hallways at Matheny. There were four different group shows, featuring works of 12 different artists including Michelangelo’s “Sistine Chapel”, Pablo Picasso’s “Three Musicians”, and Henri Rousseau’s “The Sleeping Gypsy”.