Congressman Leonard Lance, who represents New Jersey’s Seventh Congressional District, is also co-chair of the Congressional Arts Caucus. On July 20, he visited Matheny and met some of the artists in Matheny’s Arts Access Program.

Arts Access empowers individuals with disabilities to create art without boundaries. Assisted by professional artist-facilitators, participants can take part in the visual, performing, and literary arts. This past April, Arts Access received a $10,000 grant for Arts Engagement in American Communities from the National Endowment for the Arts. The grant will support Full Circle 2015 Perspectives, the annual celebration of Arts Access to be held Saturday, November 7, in the Robert Schonhorn Arts Center on the Matheny campus. 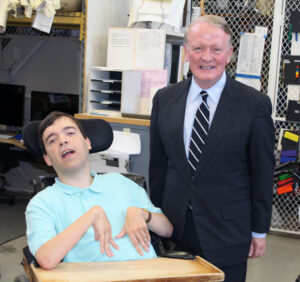 Arts Access artist T.J. Christian explained the art facilitation process to Congressman Lance during his visit to the studio in the Robert Schonhorn Arts Center.

Congressman Lance has been a strong supporter of Arts Access and served as Honorary Chair of Full Circle 2013 Reflections, the 20th anniversary celebration of the program. In his role as co-chair of the Congressional Arts Caucus, he presided over the Artistic Discovery Contest, a nation-wide high school arts competition, sponsored every spring by members of the U.S. House of Representatives. Eileen Murray, director of Arts Access, was one of the judges in that competition. Congressman Lance has also served as a member of the New Jersey Council on the Humanities, and, prior to his election to Congress in 2008, was a trustee of the Newark Museum and the McCarter Theatre in Princeton