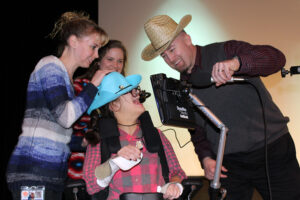 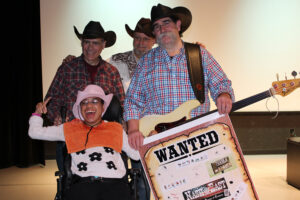 One of the high school classes at The Matheny School has been studying westward expansion in its U.S history class, and the curriculum includes playing country and western music to get students in the right mood. So, it only seemed natural to reach out to a country and western band to play during a school assembly.

Basking Ridge, NJ-based Nash East was only too happy to fill the bill, appearing at an assembly on Friday, February 26, playing and singing a broad range of country hits that included Hank Williams’s “Hey Good Lookin’”, Willie Nelson’s “On the Road Again”, and John Denver’s “Country Roads”.

With the help of an augmentative communications device, student Mary Rita Tortorello welcomed the band onstage. Another student, India Jones, presented the musicians with a special ‘Thanks Y’All’  banner at the end of the performance. And Nash East brought western hats for every one of the students in attendance.