Matt McDermott, an eighth grader at the Delbarton School in Morristown, NJ, and a resident of Basking Ridge, NJ, made his annual visit to Matheny to drop off a donation from funds raised at his family’s annual pool party. McDermott, accompanied by his mother, Susan McDermott, presented a check for $500 to Kendell R. Sprott, MD, JD, Matheny’s president and CEO. 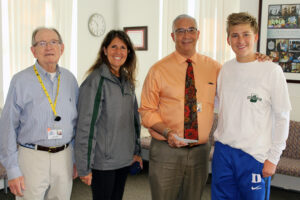 In addition to his support of Matheny, McDermott has formed a group called Athletes in Motion, designed to raise money for special athletes in the community. This is the fifth consecutive year that McDermott has delivered a donation of either cash or toys to Matheny. Thanks, Matt!