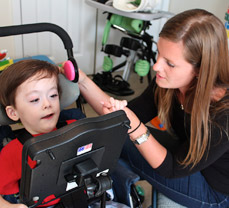 Dylan Vongrej was born with Canavan disease, a disorder that causes progressive damage to nerve cells in the brain. Dylan is non-verbal and unable to walk, but, according to his mother Noreen, “He understands everything you’re saying.” He’s also learning to communicate, thanks to speech therapy he’s receiving from Matheny.

Dylan is unable to physically attend school, but the Bridgewater-Raritan Regional School District has contracted with Matheny to have speech-language pathologist Jaclynne Dietrich visit Dylan twice a week. Dietrich is currently using two voice output switches to help Dylan communicate. “He’s pretty much mastered those,” Dietrich says. “We have programmed ‘hello’ and ‘goodbye’, and we make choices between music and books. And we have weather and numbers. His vision is pretty questionable, so we rely on his auditory abilities. We want to extend it beyond the two switches, so he can really lead his activities and tell us what he wants to do and how he’s feeling. The iPad allows for that. There is auditory scanning and switches that connect to the iPad that will make things more accessible for him.” 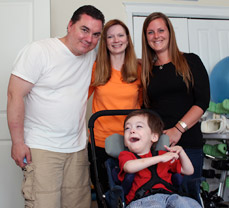 Before Dietrich began working with Dylan about three years ago, he was not able to communicate. “It was amazing what Jackie did with him,” says his mother. “He has really progressed with all of his therapists, but I’m partial to Matheny because they understand children like this more than anyone.” Matheny is a special hospital and educational facility in Peapack for children and adults with medically complex developmental disabilities. In addition to speech therapy, the Vongrejs bring Dylan to Matheny’s outpatient clinic, the Matheny Center of Medicine and Dentistry, for both his seating and mobility and medical needs. “It’s great,” says his mother, “that everything is in one place.”

Dylan currently does not attend school because he’s too medically fragile. “We started him at a preschool when he was three, and he just became very, very sick,” Vongrej says. “We’d love for him to eventually go to school one day; we’re not ruling it out.”

Matheny views public school districts, such as Bridgewater, as partners and provides help with those services districts are not able to provide on their own for special needs students. Help available through Matheny Solutions For Schools includes: specialized evaluations, therapy services, home-based services and adaptive equipment and assistive technology. For more information, call Debbie Andreoni at (908) 234-0011, ext. 237, or email her at dandreoni@matheny.org. 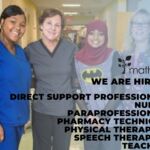 Interested in joining the Matheny Team? We invite you to campus to learn more about our open positions. We’re... 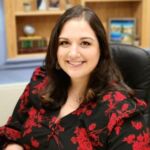 Please join the Matheny Team in congratulating Anne Bruno on her recent appointment to the position of Assistant Principal... 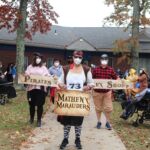 Halloween landed on a Monday in 2022, but that certainly didn’t dampen the spirits of those participating in our...