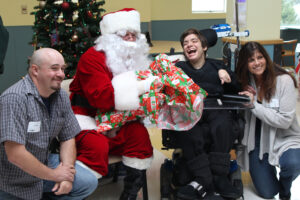 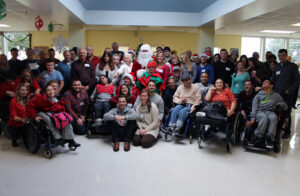 CARS volunteers gathered with Matheny residents and staff for a group photo at the end of a fun-filled day.

In 1974, auto racing photographer Ace Lane, Jr. and three other auto racing enthusiasts founded the Committee of Auto Racing Supporters (CARS). For the past 41 years, the CARS organization has not only been dedicated to car racing; its members have gone out of their way to cheer up the children and adults at Matheny during the holiday season.

Every year, CARS volunteers throw a Christmas party for residents of Matheny and its group homes, bringing presents for those who do not have strong family connections during the holidays. The most recent CARS Christmas Party was held on Saturday, December 19, and the dining room at Matheny was filled with the Christmas spirit as the CARS members, from all over New Jersey and neighboring states, brought gifts and holiday cheer to Matheny’s students and patients.